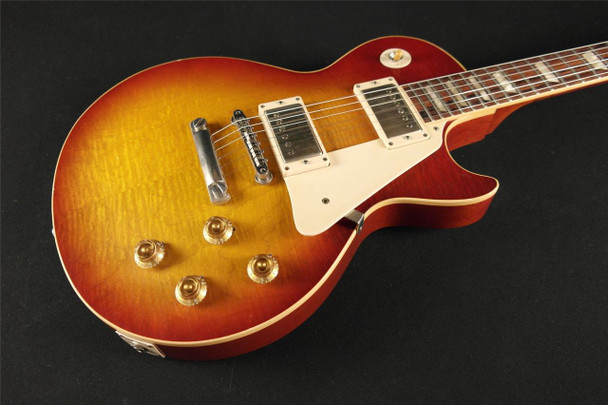 This extremely limited edition boasts all the original features of the debut '58 Les Paul.

Here's your chance to own a landmark guitar that changed the sound of rock and blues, the 50th Anniversary 1958 Les Paul Standard. Gibson is producing only 200 of this limited edition.

Everything that made the original great is found on this special commemorative edition. The figured maple top is carved to original spec with a solid Honduran mahogany back. The neck is also one-piece mahogany with the historically correct long neck tenon for sustain. The early '50s neck profile is rounded for comfort. The rosewood fingerboard has Gibson's distinctive trapezoid inlays. Side position markers are tortoise, just as on the '58. The stop tailpiece is lightweight aluminum, and the tuners are vintage tulip style, with push-in bushings, just like the original.

This anniversary '58 employs CTS potentiometers for volume and tone, as well as the bumblebee capacitors, custom-made for Gibson to replicate the original electronics. Speaking of electronics, we can't leave out the Burstbucker pickups, custom wound to emulate the original late '50s Gibson humbuckers.

The thin nitrocellulose lacquer finish material and methods as the same as was the practice in 1958. Nitrocellulose lacquer continues to evaporate insuring the thinnest possible finish that will never dampen vibrations and supports complex musical waveforms! Prized for enhancing the musical tone, you'll find a nitro finish on nearly all vintage and collectable American guitars.

The guitar's nitrocellulose finish is carefully aged by guitar guru Tom Murphy and looks like a carefully maintained 50-year-old guitar! The highly involved antiquing process is done by hand, one guitar at a time, by guitar artisan Murphy. It's not a chemical process, but a very time consuming and tedious job that includes a multitude of elaborate steps. Through much trial and error, Murphy has developed an amazing ability to re-create the checked and chipped finish of a true vintage instrument with great success. Your guitar will carry the look of a thousand smoky bar gigs, countless sessions, and maybe even a few world tours.

With all that has been written over the past 50-plus years about the fabulous Gibson Les Paul 'burst, it's hard to fathom that it wasn't an immediate success. In fact, only 434 Les Paul Standards were built in 1958, and most of those were Goldtops! The first sunburst 1958 Les Paul was shipped by Gibson on May 28, 1958. Today, those 50-year-old sunburst Les Pauls are bringing in over $150K on the collector market!

MSRP:
Now: $12,000.00
Was:
The Gibson Custom R9 Les Paul is the quintessential collectors guitar. With it's authentic 1959 specifications, tone, and playability, this guitar is an excellent addition to any players arsenal...

MSRP:
Now: $4,699.00
Was:
Description 1958 Les Paul Plaintop Reissue VOS This guitar now has a rich, rubbed appearance that cannot be equaled at any price this instrument is a true beauty. Gibson Gazette, December...

MSRP:
Now: $12,000.00
Was:
The Gibson Custom R9 Les Paul is the quintessential collectors guitar. With it's authentic 1959 specifications, tone, and playability, this guitar is an excellent addition to any players arsenal...

MSRP:
Now: $5,499.99
Was:
1958 Les Paul Standard Reissue By the time the sunburst finish finally arrived on Gibson’s Les Paul Model in 1958, the guitar had already evolved through several modifications through the course of...

MSRP:
Now: $9,750.00
Was:
Product Description This is an original vintage 1964 Gibson SG Special in cherry. It is in great condition with an expected amount of patina. The SG Special evolved out of the Les Paul Special in...

MSRP:
Now: $88.00
Was:
Skilled Teachers that exceed your expectations… Tundra Music has been operating a music school since the 90’s.  We offer 30 highly skilled guitar teachers with over 400 combined...

MSRP:
Now: $1,399.99
Was:
This is a sweet example of a 2011 Gibson Melody Maker Joan Jet Limited Edition, it is in excellent shape you can see for yourself with the HI RES photos in the listing of the actual guitar up for...

MSRP:
Now: $3,999.99
Was:
This is a beautiful Rickenbacker 381 12 electric guitar , in like new condition. This guitar was hardly played by its previous owner and kept in fine condition. There are no visible scuffs or marks ,...

MSRP:
Now: $10,999.00
Was:
This guitar is a perfect example of Yamano Music's reputation fine at work. They are known for ordering, and importing only the finest high quality instruments for the japanese market. This Gibson...