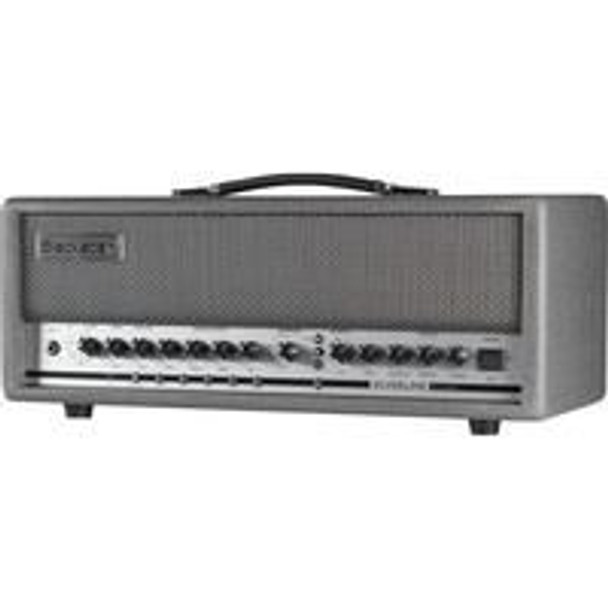 The Blackstar Silverline may not be the first digital amp to give variable voicings and onboard FX a familiar face. But it IS one of the first in a long while to make it look so easy and feel so darn fun. From its tube-laden guitar tones to its classic-head looks and controls, the Silverline Deluxe is a thrill to play — strumming “Hallelujah” with reverb or chunkin’ out “Unchained” with gain, you’d swear you're parked in front of a tube amp. In addition to its wide gain range (and we do mean WIDE), the Silverline Deluxe provides variable power tube emulation (KT66s to EL84s), an expressive EQ and ISF section, master resonance and presence controls, and gobs of gooey analog-inspired Super Wide Stereo effects. It’s all powered by a high-powered SHARC processor and Blackstar’s patented TVP technology for realistic approximations of six in-demand amp tones. Not only that, but a speaker-emulated output, MP3 input, and a USB connection make this head a knockout for gigging, recording, re-amping, and preset saving/sharing.

Though its top panel may read similar to the ID:Core lineup, the Silverline Deluxe’s superior amp voicings are on another level. With the spin of the knob, you've got access to six totally inspiring and entirely customizable amp voicings based on some modern in-demands.

This output gives you the dimensional response of a miked-up cab to facilitate streamlined gigging and recording. So whether you're cranked onstage or whisper-quiet at practice, you've got the freedom to perform and record without a cab and microphone.

One of the Silverline Deluxe’s best qualities has to be its choice visuals and streamlined controls. Not only does it don the sleek look of today's boutique guitar amps, but it puts every control exactly where you expect it. Gain, EQ, Level, FX — each function is assigned to its own dedicated knob. The smooth silver “faux-lex” and matching silver grille and logo are nice touches to boot.

True Valve Power (TVP) gives your Blackstar Silverline Deluxe six different responses modeled after the most popular power tube types. Here you can choose the responsive dynamics, sag, swing, and breakup of your choice from EL84s, 6V6s, EL34s, KT66s, 6L6s, or KT88s. You can create entirely new amp tones on the Silverline Deluxe when you blend your TVP and your ISF controls together to sculpt your signature sound.

The Blackstar Silverline Deluxe is packed with a massive variety of tube tone, thanks to Blackstar’s patented Infinite Shape Feature (ISF). When turned fully counterclockwise, ISF lends an American characteristic to your amp choice, with a tight bottom end and a scooped midrange. Turned all the way to the right, you'll enjoy a more-common British mid-forward voicing. Paired with the onboard EQ, Blackstar’s ISF makes the Silverline Deluxe a playground of great sounds.

The Silverline Deluxe’s six selectable voices can be dialed in with EQ, power tube, and FX choices and saved to one of the amp’s preset locations. These presets are then accessible via buttons on the amps control panel or via an optional footswitch. And if you've got a laptop nearby, then you’re in for a world of tweakable tones and artist presets. The Silverline’s USB connection grants you access to Blackstar's free INSIDER software for deeper editing, preset management and sharing, and even direct recording. Take it from guitarists at Sweetwater: if you’ve been searching for a giggable solution with real-deal tube amp looks and tones to match, the Blackstar Silverline Deluxe is well worth a look.

MSRP:
Now: $599.95
Was:
The ID:100TVP is a 100 Watt programmable head. When paired with a matching ID:412 4x12 cabinet it becomes a killer half stack perfect for gigging. The ID: Series represents the culmination of more...

MSRP:
Now: $2,599.90
Was:
The Artisan 100 takes the boutique 100W design to a whole new level of flexibility. The Voice control is a timeline which chronicles the evolution of the genre from the earliest American designs...

MSRP:
Now: $1,309.95
Was:
Description: 100W Stereo Digital Combo with 2 x 12" Celestion V-Types The Blackstar Silverline may not be the first digital amp to give variable voicings and onboard FX a familiar face. But it IS one...

MSRP:
Now: $1,049.95
Was:
Description:  100W Digital Combo Amp with 12" Celestion V-Type The Blackstar Silverline may not be the first digital amp to give variable voicings and onboard FX a familiar face. But it IS one...

MSRP:
Now: $916.95
Was:
Description: Like all amps in Blackstar’s HT Venue MkII series, the HT Studio 20RH MkII is a powerhouse — it’s packed with all the tones you’ll ever...

MSRP:
Now: $1,179.95
Was:
Description:  Powerful Amp Head That's Better Than Ever Take the stage with Blackstar's versatile HT Club 50 MK II amp head, and you'll have all the tones you need...

MSRP: $750.00
Now: $699.99
Was:
Description Express your personality with this Marshall ORI20H Origin 20wTube Amplifier Head. With sleek styling and modern features this amp is ideal for playing in different environments from...

MSRP:
Now: $149.95
Was:
Description: The Blackstar HT FS-14 footswitch puts full control over your Venue MkII amplifier right at your feet. Its ultra-rugged housing and low-profile...

MSRP:
Now: $699.95
Was:
Description: The HT-5RH has always been a top seller for Blackstar. At five watts, it’s the quintessential low-watt practice amp. And the MkII version ups the ante...

MSRP:
Now: $1,149.99
Was:
The Vox AC15CH delivers the classic chime and complex grind that has made the brand famous. This 15-watt design was one of the first to define the British sound and continues to be used on stages and...

MSRP: $940.00
Now: $849.99
Was:
Description The Marshall ORI50H Origin 50w Tube Amplifier Head enables you to express your personality. The Origin50H delivers classic, rich and harmonic tones with a contemporary, sleek style. The...

MSRP: $690.00
Now: $549.99
Was:
The CODE100H from Marshall Amplification is a 100W amplifier head designed for guitars. It emulates both vintage and modern Marshall tones while adding high-quality effects into the mix courtesy of...