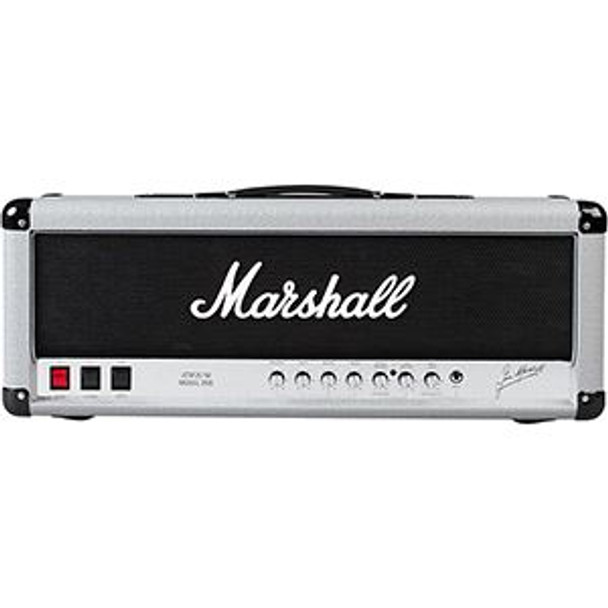 A rebirth of one of Marshall's most-celebrated heads.

After much customer demand, Marshall is offering the most popular product from its Silver Jubilee range. First released in 1987 to celebrate 25 years of Marshall Amplification, and to commemorate Jim Marshall's 50th year in the music industry, the 2555 has become a legendary and much sought-after amplifier due to its distinct looks, sound and features. The 2555X is a modern-day reissue, featuring all of the original panel features found on the 2555, and reproducing its signature tone perfectly.

The Silver Jubilee series was created in 1987 to celebrate the 25th anniversary of the founding of Marshall Amplification and the 50th year of Jim Marshall being in the music business, hence the Silver Jubilee' original 25/50 designation.

Based on JCM800 2203 and 2204 Master Volume models, the Jubilee amplifiers were the first Marshall products with Pentode/Triode switching, which halves the power output. Players such as Joe Bonamassa, Slash, Alex Lifeson, and John Frusciante have all included Jubilees in their arsenals and sing the praises of this amp.

What' the difference between the new reissue and the original Jubilee?
While the 2555X circuitry was taken from original 2555 diagrams and has sonically been checked against the 2555 head in the Marshall museum, modern production techniques have made it possible to make several improvements to the electronics.
-Switching circuitry has been improved to avoid a relay flickering problem found on some original 2555s.
-Improved (DC) heaters ensure no noise.
-The introduction of external bias points on the chassis for re-valving and servicing.
-Black fiberglass wires that are high temperature and high voltage resistant.
-Multi-pin connectors have been improved with higher insertion force and current capabilities, but remain PVC just like the originals.

Other important enhancements to the reissue include:
-The back panel of the original 2555 had two speaker output jacks and a rather awkward Output Impedance Selector. For easier operation, the 2555X has no selector and instead has five speaker output jacks ranging from 16 Ohm to 4 Ohm.
-The Mains Voltage Selector from the back panel has been removed and each 2555X amplifier is fixed to match the mains voltage of each country.

And, to complete the ultimate half-stack (or full-stack) rig, check out the 2555X AV (slant) and BV (straight) 4x12 cabinets, complete with Celestion G12 Vintage 30 speakers and the same gorgeous silver finish as the head.

MSRP: $3,879.00
Now: $3,499.99
Was:
Description: The amp that started it all! The Marshall JTM45 Amp Head is a lovingly created reproduction of Jim Marshall's first amplifier. Now the classic JTM45 is accessible to all who enjoy its...

MSRP: $3,199.00
Now: $2,849.99
Was:
The Marshall JVM210Hl is one of the most professional, all-valve amplifiers ever offered. No other multi-channel, multi-mode amplifier delivers the amazing all-valve tone offered by the JVM210H at...

MSRP: $599.00
Now: $499.00
Was:
Description: Classic Marshall amp, now in a limited-edition cream. The AS50DC is a compact and portable 50 Watt combo amplifier specially designed for use with acoustic instruments. Between its two...