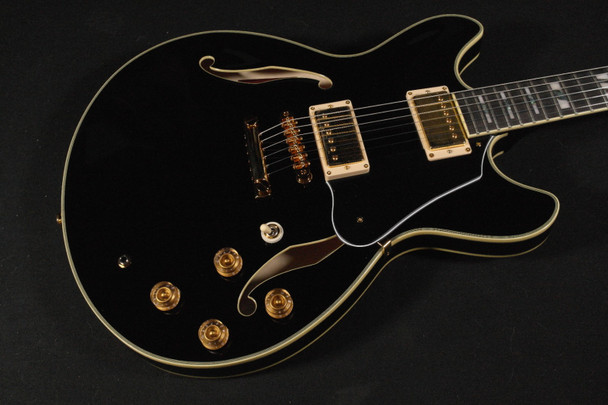 Photos are of the actual guitar for sale.

The JSM20TH John Scofield Signature semi-hollowbody from Ibanez celebrates the 20th anniversary of the first John Scofield Signature model, which itself was a take on the jazz guitarists 1981 AS200. Showcasing a blend of warmth, clarity and a dynamic tonal range, the JSM20TH features a maple top and body for an incredibly tight response, an African mahogany neck for a rich mid-low end and an ebony fretboard for enhanced sustain. This hollowbody electric is equipped with John Scofield Special pickups, sporting gold covers and each with its own Volume and Tone control. Additional features include a Gotoh 510N bridge, Gotoh GE101A tailpiece and Gotoh tuners for tuning stability.Maple top and body. Set-in mahogany neck. Ebony fingerboard. John Scofield Special humbucking pickups.

MSRP:
Now: $1,949.99
Was:
Photos are of the guitar for sale. Ibanez EH10-TGM CHON are one of the hottest new guitar bands around, their largely instrumental, twin guitar led fusion of Math and Progressive Rock has seen them...

MSRP: $799.99
Now: $584.99
Was:
Description:  Ibanez introduced Artcore in 2002 and has been the hollow-body guitar of choice for musicians for the last 10 years. The Artcore's combination of quality workmanship and...

MSRP:
Now: $1,599.99
Was:
Photos are of the actual guitar for sale. Takamine EF407 Legacy Series New Yorker Parlor Acoustic/Electric- Guitar Natural Gloss This marriage of koa top, back and sides in a slot-head New Yorker...

MSRP: $399.99
Now: $324.99
Was:
Description:  Offered in a white finish, the Ibanez PGMM31 Paul Gilbert Signature Series Electric Guitar offers you a double-cutaway poplar body and a PGMM bolt-on maple neck. It has a...

MSRP: $1,333.32
Now: $909.99
Was:
Description:  Macassar Ebony produces tight lows and mid range along with strong attack in the highs and quick response with rich sustain.